Coal India Ltd., India's largest state-run coal miner, reported its coal production climbed 4.06% from 51.7 million tonnes in a year ago to 53.8 million tonnes in November, hitting a new high since April this year.

The output was 8.03% higher than 49.8 million tonnes in October, data showed. 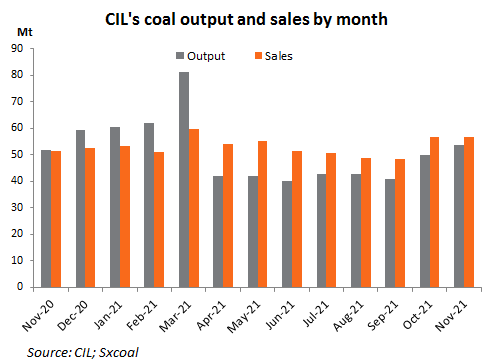 Its sales rose 10.72% on the year to 56.8 million tonnes in November. The volume inched up by 0.18% from the month-ago level, hitting the highest so far in the fiscal year.

Coal production by CIL accounts for over 80% of India's coal output, and the firm plans to churn out 1 billion tonnes of coal during fiscal year 2023-24.

All rights reserved. No reproduction is allowed without written permission.

China's spot thermal coal market jumped surprisingly against the previous expectation of falling down in the rest of the month, possibly as bullish factors, such as increasing mine-mouth prices and su

Indonesian thermal coal prices have been stable for weeks since the country enacted a ban on coal exports for the whole month of January, but the prices are likely to jump strongly once the ban is lif

China's central state-owned enterprises produced over 1 billion tonnes of coal in 2021 for the first time in history, Peng Huagang, Secretary General of the State-owned Assets Supervision and Administ

China's major coal indices rose again on January 18 after calming down for several sessions, which came as a surprise to market participants as supply-demand fundamentals were quite loose alongside Ch

Four major energy-intensive industries in China all registered increases in power consumption in 2021, according to the latest data from the China Electricity Council. The chemical materi

China's metallurgical coke market is currently directionless, as looming restrictions on steel production add uncertainty to the fourth round of coke price increase. Views from participan

Australian miner BHP produced 8.82 million tonnes of metallurgical coal during October-December, down 7% year on year but largely flat quarter on quarter, according to its quarterly report.

Indonesia's Ministry of Energy and Mineral Resources (ESDM) allowed another seven companies to export, CNBC Indonesia reported, citing a letter by the ministry's Directorate General of Mineral and Coa

The impact of Indonesia's coal export ban has continued since the start of 2022, even after some vessels being allowed to sail out in the latest development. While it could have limited impact on Chin

China's coal production hits record highs in December and in the full year of 2021, as the government continued to encourage miners to ramp up output to ensure energy supply, which has greatly offset

Daily crude steel output at key member firms of China Iron and Steel Association (CISA) was registered at 1.97 million tonnes during January 1-10, ticking down 0.75% compared with the previous ten day

China's coal imports in December fell from a month earlier due to the squeeze by increasing domestic supplies under long-term contract mechanism. China imported 30.95 million tonnes of co

Please enter the key words, no blank or special characters