Australia's Queensland government has announced to raise its royalties on coal from July 1 following a 10-year freeze, with the top tier increasing to A$300/t for 40% royalties charge from the current A$150/t for 15% charge. The move would have greater impact on coking coal operations, though thermal coal will also be affected.

Queensland produces both coking coal and thermal coal, with the former accounting for roughly 66.87% of the total. 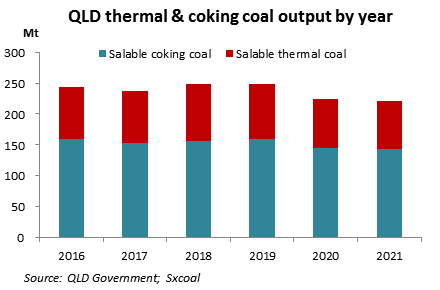 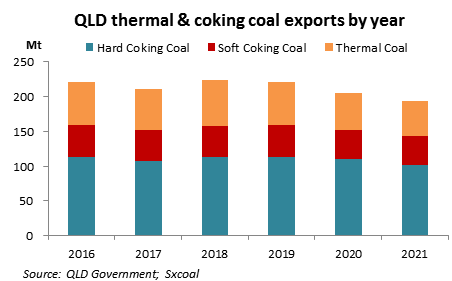 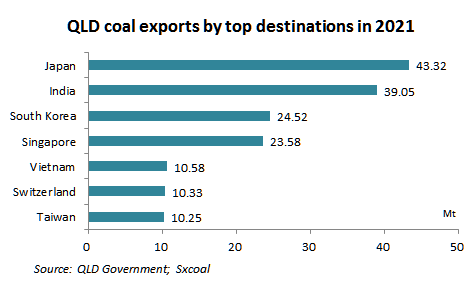 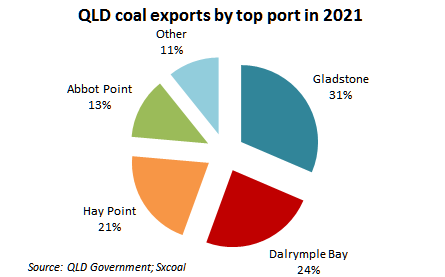 Most of Australia's coking coal and thermal coal (both called black coal) is produced in Queensland and New South Wales, followed by Western Australia and Tasmania, with a vast majority exported to overseas markets.

Raw coal production in Queensland accounts for 55% of Australia's total in 2019, data showed.

In 2019, the estimate of Australia's recoverable economic demonstrated resources of black coal was revised upwards from 73.72 billion to 75.43 billion tonnes, up 2.3% from a year ago, with the large increment coming from Queensland's Hutton Coking Coal Project, the Olive Downs Coking Coal Project and Hail Creek in Bowen Basin and Wandoan in Surat Basin.

The new coal royalties plan will add costs to coal produced in the state, with coking coal likely suffering the main part of the adverse inpact due to its much higher prices than thermal coal.

The new higher tiers only take effect on the portion of the royalty price above the relevant price, according to Cameron Dick, Queensland Treasurer and Minister for Trade and Investment. 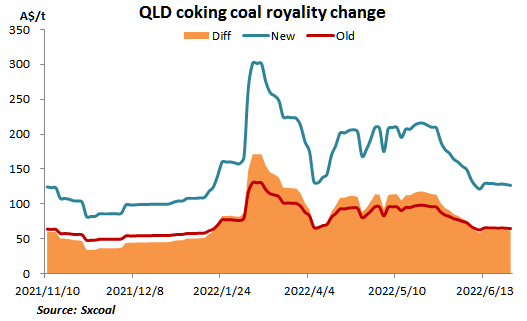 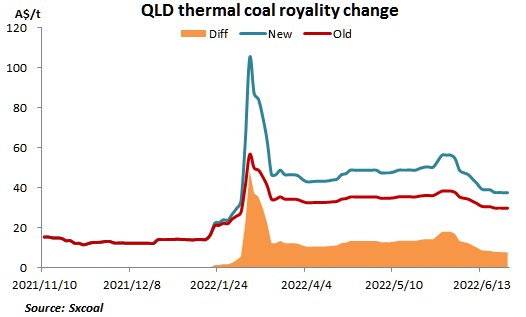 Despite the increase, during period of low prices, Queensland royalty rates will be lower than those charged in New South Wales, according to Dick.

Around 91.8% of coal in Queensland comes from open-cut mines, according to Queensland Government data.

All rights reserved. No reproduction is allowed without written permission.

China's thermal coal prices edged up as increased coal consumption in some areas in the east prompted a new round of purchase, traders said. On August 9, traders reported a 10-20 yuan/t r

Indonesia plans to put coal exports on hold from 48 miners who had failed to complete their Domestic Market Obligations (DMOs) without explaining reasons, CNBC Indonesia reported on August 9, citing a

Chinese thermal coal miners anticipated mine-mouth prices to pick up further in the near term, as recent downpours and stringent safety checks reinforced expectation that overall supplies may contract

Thermal coal Production area Thermal coal prices ticked up at some mines in Yulin of Shaanxi and northern Shanxi, and prices at other places also stabilized. Supply for spot buyers remained tigh

Check out latest updates on the Chinese futures market for thermal coal, coking coal, coke and others at close.

China imported 23.52 million tonnes of coal in July, rising 23.92% or 4.54 million tonnes compared with the preceding month and marking a significant rebound after two straight months of decline, acco

Southern China's Guangdong province has suspended the implementation of level-2 limit for spot electricity prices, according to a circular issued by the Guangdong power trading center on August 1, in

China's Foreign Minister Wang Yi and his Mongolian counterpart B. Battsetseg confirmed the connection of the Gashuunsuhait-Ganqimaodu port by rail and agreed to sign stable long-term coal contract dur

Indonesian thermal coal market remained bearish at the start of this week, as Chinese utilities, which recently made purchases, pressed down prices as they were not in a hurry with the summer coming t

Indonesia's state-owned power group PLN may suffer from coal supply tightness if no measures are taken to strengthen supply from domestic miners, who preferred to sell coal aboard rather than domestic

Mongolian coal exports grew drastically by 180% from the year prior to 666,300 tonnes over the week of July 22-28, Mongolian media reported. The volume mainly included 5,532 containers tr

China's coking industry has pledged to peak its carbon emissions by 2025 mainly through stricter emission controls and technological breakthroughs, according to a work scheme issued by China Coking In

China's thermal coal prices may extend declines in the remaining days of this month following the recent price fall, pressured by cooler weather and slackness in industrial activity, traders said.

Russia's seaborne coal exports totaled 15.7 million tonnes in July, marking a year-on-year decrease of 3.14% and down 6.19% month on month, according to Kpler's cargo-tracking data.

Please enter the key words, no blank or special characters